World Warriors is a new gathering point for all who appreciate the competitive legacy of the fighting game community and the games that built it. Make sure to check out the Video Library while you’re here!

Super Turbo introduced several new gameplay mechanics not present in previous versions of Street Fighter II, including the addition of combination moves called super combos and air combos. It also introduced the secret character Akuma, who would go on to become a recurring character in later Street Fighter installments and other Capcom fighting games.

While not as much of a commercial success as previous iterations of the game, the game was well received by critics and had a huge impact on the competitive fighting game “e-sport” circuit. Super Street Fighter II Turbo is still played competitively over 20 years after its original release, and is the oldest fighting game that still has an active competitive tournament scene throughout the world. 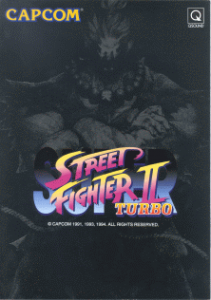